Hi evewydoggie, hammie and catfwiend..I have a poem to wead to you befowe I tell you about the fun stuff in my life..so pleez listen

'Twas the night before Christmas, when all through the house
Not a creature was stirring, not even a mouse

The stockings were hung by the chimney with care
In hopes that St. Nicholas soon would be there

And mamma in her 'kerchief, and I in my cap
Knew he was cold, but didn't care about that

When, what to my wondering eyes should appear
But Santa Claus - with eyes full of tears

He un-chained the dog, once so lively and quick
Last year's Christmas present, now painfully thin and sick

More rapid than eagles he called the dog's name
And the dog ran to him, despite all his pain

'Now, DASHER! now, DANCER! now, PRANCER and VIXEN!
On, COMET! on CUPID! on, DONNER and BLITZEN!

A dog should be family, and cared for the same
You don't give a gift, then put it on a chain

And I heard him exclaim as he rode out of sight
'You weren't given a gift! You were given a LIFE!'

Author Unknown
it's a stowy that has a vewy impowtant message and I hope all hoomans listen to it pleez!pass
it along this Holiday Season!

NOW ON A HAPPIEW NOTE:
This was me yestewday with some of the othew staws of the Santa Caper on the wed cawpet..it's all vewy exciting and I don't even know the whole stowy...to see mowe wed cawpet pictoowes go to kattenpraat-catwalk.blogspot.com 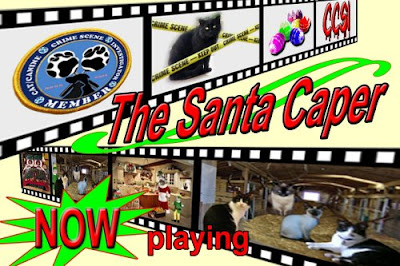 The second episode of CCSI is now airing on Sassy's blog. Scurry on over there to check out CCSI's latest show!

Written by Karl
Directed by Ruis
Produced by Sassy

my wole in the movie is afowensic skientist-investigatow called Dr.Hinweis..this is an outtake fwom the film

ohmygoodnes! Now I know somebody famous. You look like a beautiful star in the sky. Glamour all the way...

Asta, you look beautiful! Boy was that an exciting premiere, too. I cannot wait for the next episode.

What a wonderful poem! We'll have to visit Sassy's blog to see the movie clip! You look just lovely in costume, Asta!

Asta...you are so bootiful and famerous. I can't wait to go see it!

That was a beautiful and sad poem.

Wow, this episode sounds good! I gotta see it!

WOw... a role as a forensic scientist sounds very interesting. I will go see the firts episode now.

wowowowow Asta, you are a celebrety. we love forensic stuff, it's so fascinating.

we really like your poem. we are gonna send it to everyone we know.

Asta you look stunning in your white coat! Congratulations on your role in this production.

Hi Asta!
That story is so sad, yet so true!! We'll be sure to pass it on, we'll post a message on our Dogster group.
But congrats on the movie!! You guys look so pawsome on the red carpet!!
Wags and licks,
Maya and Kena
PS. Too bad it's raining over there!! Hope it snows soon!

Your in a movie. How cool is that.

Hi, Asta
Thanks for sharing that poem! Yes, you made us cry!
You all look great in that picture! I am going to see Sassy's blog to check it!
Have a good night
Lorenza

That poem gets me every time. It does send such an important message.

Asta you are a STAR! (Sam I Am hopes you don't get too famous and forget him.)

Patience and the snoozin' whippet waggle

That poem gets me every time. It does send such an important message.

Asta you are a STAR! (Sam I Am hopes you don't get too famous and forget him.)

Patience and the snoozin' whippet waggle

Oh dear that poem made PL2 cry but she said she is going to go see your moive and she knows that will cheer her up!! Love A+A

Oh my...we don't do that, we promise. Mumsie just shook when she read it...she's been shakin' all day, part from 'citement and part from nausea. Big Bruvver sounds like a new guy...Dale's gonna be a good thing...we need help at the pawty...lotsa help!

that poem was sad, but santa is a hero for sure. you look pawesome in your role, except there seems to be a lot of cats involved.

We we love the poem loads... very meaninful...

u look very very smart there!

You look FABuloso on the red carpet, but I think you look even better in your skientist goggles! WooHoo. Nothing sexier than an intellectual pupgirl!

The peom is very touching. Look at you, making it big in the movies.

Hey Asta, are you going to solve the mystery in your role as forensic scientist? I just visited your pal and watched the first installment! Can't wait to find out what happens! J x

Heheheeee! We watch CSI, speshly Dilly, hoo likes to do air gittar to the mewsik, but I've never herd ov CCSI! HEHHEE! I must sho this to Dilly! HEHEE!

Yu do look nise in that wite coate!

That was a very beautiful poem, and it touched my heart.

Asta, you make a great scientist!

Asta - the second part is up! And you are ON SCREEN and you are fabulous!!!
You are such a great actor - I see Oscars, I see Emmies, I see Golden Globes, hahahahahaha!
Karl

Asta!!! Quick note before leaving Toronto.
You look fabulous in the show!! Can't wait the part3!!

We also wanted to share the friendship award with you. :)

Hiya Asta!
Hope you had a great day too!
Tell us when the next episode comes!! We can't wait to see you in the movie, this is so exciting!
Too bad it hasn't snowed yet..over here in CA it was so cold that if only it had rained, it might have snowed!!
Wags and licks,
Maya and Kena

That's a sad poem. Someone asked ma today if Cassidy was a Christmas present!

Asta you are such a star! I mean I'm so lucky you pay attention to me!

Do they ever hang out with hairy collies? I mean look all Lassie did and Lassie was a guy pretending to be a girl! I'm a REAL girl Collie! Can you like get me a bit part or something? Or even a job around the set. I could like give cats rides on the lot and things. I am used to cats riding me.