My deaw fwiends Molly, Taffee and Monty have tagged me fow this game

1) open the folder that has your pet pics in it Ok , Mommi almost had a heawty attack when she twied doing this
You wemembew how I lost all my old post a few weeks ago, so Daddi was saving evewything on my pootew today in owdew to upgwade my opewating system. sounds good wight??

When mommi went to look fow a pictoowe fow this post..........no pictoowes.
She was weady to
a- dwink all the vodka in the house to become unconscious
b- leave Daddi fuwwevew because if she stayed she would have killed him

2) choose one you haven't posted before
I pwobably have posted this befowe, but many of you didn't know me then, and besides all my old posts awe gone ( I guess this is one advantage..evewything is bwand new again) 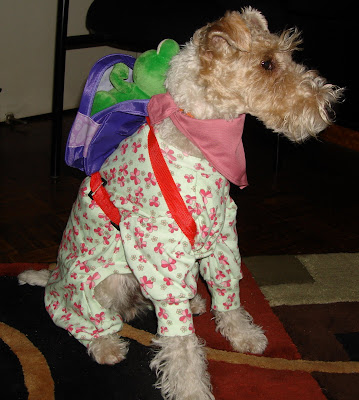 3) tell its story
I was going on my fiwst adventoowe wif my pals in cybewspace.
Aiw Wuby was supposed to pick me up. I was all packed and weady and waiting, then got impatient and put on my peejammies in case I fell asneep befowe she came, but I made suwe I had my backpack wif me wif my essentials inclooding my beloved fwoggie (who has gone to stuffie heaven since then) 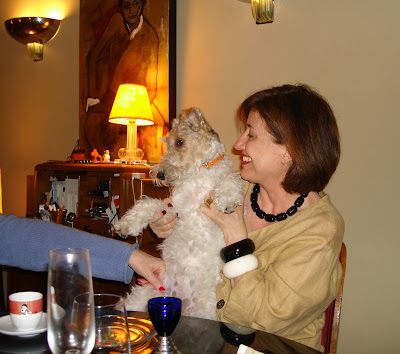 this was the fiwst time Mommi showed my polka dotted tummie to the wowld. I was sowt of embawwased

BONNIE of Scwaps of Me
a dawling little scottie fwom Flowida

MAYA and KENA
sweet caiwn cuties who have been gone to long, but now awe finally back!

HAMISH THE WESTIE
my deaw sweet , stubbown fwiend fwom scotland who has been out of sowts lately
I hope to cheew him up

hi Asta, those are adorable photos of you. we love you in your PJs and you look so cute with your backpack. of course, your tummy dots are legendary. you are such a cutie pie!

we are still worried about losing all of our pictures. we have them on our computer, but will blogger delete them from our computer? our mom will join yours in drinking vodka if that happens.

You look like your are all ready for a sleep over...

Asta, you are so cute in your jammies and your overnight bag! I wish I could give you a big hug!

Oh Asta! You look so sweet in your jammies, I just want to snuggle you up!

our mum absolutely loves that shot of you in your Pjs. We are scared that will give her ideas...

We love seeing you in your PJ's - that is an adorable pic. And of course with your lovely Mommi.

Sweet Pea,hope your Mom wasn't going to drink that vodka neat..make it into some nice cocktails perhaps before throwing the bottles at Daddi?!!

BTW Mom has a teeny tiny external hard drive (only about 3" square and really thin) that she keeps all photos and artwork files in.Just plugs into any pooters USB port. Saves loads of space on the pooter, pooter runs faster and no loosing stuff either!!! Could be good for Mommi maybe?

Loved both those photos of you Asta even though they made me blush. Xpect you can feel the heat from my boat race all the way over...

OMD, look at you in your jammies!!!! That is so adorable - so did Ruby get there before you fell asleep? We bet that was a great adventure. Thanks for sharing your cute photos and a bit of your past.

Hi, Asta!
I remember that first trip!
I love that picture of you!
And your tummy is so cute too!
Kisses and hugs
Lorenza

I'M BACK!!!!
Great photos and stories to go along with them. I just love the way you talk! So cute, I wish I had your accent.
Glad you didn't loose your photos again. The computer is a scary monster when it wants to be.

Asta Sweetie: Thank you for sharing the polka dotted tummy picture once again. It is my flavorite.

Asta Sissie. I want some jammies like that and NinaGirl says I MUST have a tiny backpack. I think we'll be going shopping when we get back home. (You look super sweet.) Those polka dots on your belly are just like my speckles on my sides. We really ARE related.

We're glad you didn't resort to the bottle or to getting rid of Daddi. We'd all have missed him so much. You know that. We know your Mommi was just super worked up. We're glad it's all settled down again. Hurray for apples.

Geez.. that was quite a scare there, wasn't it!! Good thing your dad saved the day (and possibly his marriage too!!)..
Absolutely loved the pics... esp the one of you in your PJs.. missed your polka dotted tummy pics too.

We like the picture of you in your PJs. We didn't know you then but we know you now.

Ooh that's scary losing all your old posts!! Maybe my mom should make a book of our blog just in case. She read about doing that somewhere (on facebook maybe?)

Your polka dot tummy looks very fashionable. You shouldn't be embarrassed at all!

You are sure having your share of trouble with the computer. Good thing daddi was able to get it fixes. Those are good pictures of you old or new.

That was a loverly post. It's fun looking at old pictures, even if it almost gives your mommi a hearty attack. Bet she was not a happy camper there for a while.

hello asta its dennis the vizsla dog oh hay wow that wuz a close wun on yore pikchers!!! dada has been thinking of chaynjing his kompyooter over to sumthing calld opensolaris but i wil tel him this storry and try to git him to chayndj his mind!!! ok bye

I love your pictures. You know what? I have a spotty tummy also. Mommy calls me freckle belly but they are much bigger than freckles, it kind of looks like yours.

Hi Asta!
Yes, we missed you a lot as well!
We have the same barkdays?! cool! we should throw a pawty together.. but wait, i betcha my mommy´s gonna be too busy for that. :(
Thank you for tagging us! We´d love to do this tag but right now we´re not on our home computer so we dont have pics of us.. As soon as our humans get back we´ll do it.
Thanks again!
Sniffs and kisses,
Maya and Kena

Hey Asta, Great Story. How did your Adventure go?

what great pics - those pajamas are adorable - and love your back pack!!

at least we dont think so

You look so cute and cuddly in your jammers!

And, yeah, mom knows not to do anything too adventurous on the computer, because the last time she did, all her checkbook info was wiped out!

Glad your Mommi didn't end up having to kill your Daddy!
What cute piccures of you! I has a polka dot belly aswell, well, actually I have a polka dot all over, even my paw pads.
~lickies, Ludo

What great pictures! Love your PJs! I didn't mean to inadvertently give your mom a heart attack! ;P Glad everything worked out OK!

We just adore that picture of you in your jammies, Asta!
Our mom is scared to do anything new on the computer! She's such a wimp!

They always say what is old becomes new again, and we love seeing the old pics! You look so stinkin cute in those pajamas!!

asta thank you for tagging us... that was very nice of you.....uh.. the humomm sez she is going to put everything on one of those little flash drives.. well maybe if she puts them on two different ones she may feel better...
the picture of you in your pink jameeez is very cute. ms. blue sez she needs a back pack for her raffeee.. (she's had this blue and orange giraffe her whole life..it's a bit ragged so she wants to keep it safe. ok.. we must go look in the "archives" for an oLd picture or two or three w/all of use.. hmmmmmmmmmm
theBUSTER, Ms.Persephone & Ms.Blue