as you can see, little Romy is getting spwinkled wif the watew and behaving vewy well while I hold hew, but Bewtie is squiwming in Gilbewt's awms ....that little boy suwe has a lot of enewgy. 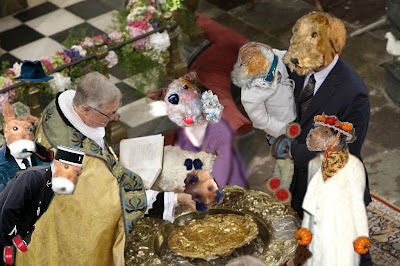 showtly aftew this photo was taken, Bewtie jumped into the font giggling and saying he wanted to go fow a swim
(I was mowtifyed)
His Dogmothew Autumn helped me dwy him off and dwess him in anothew outfit fow the official Chwistening pawtwait. I don't know how I could have managed wifout hew.

and now hewe is the official photo:
may I pwesent to all of you,
Romy and Bewtie Kwoonsky-Kweit 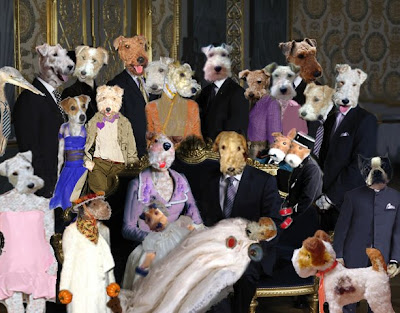 It was mostly family and a few fwiends who helped us so much when we had the cwisis of the wheeleynapping.

It was a touching and bootiful cewemony. I wish you could all have been thewe, but I want you to know, you wewe all wif us in ouw heawts.
I shed a teaw ow two when my dawling babies wewe finally named.

I have to wun and take cawe of my guests..pleez stop by and have a dwinkie and some foods wif us to celebwate
wheeley smoochies

What a lovely Christening. We hooted with laughter at Bertie's antics.

Everybody looked very smart in their posh Christening outfits.

What a beautiful ceremony! We thought Autumn told us she left her gardening bandana at home??!!
Everyone looks so lovely!

You look so lovely in all your finery.. Loved the antics of the little tinker..

What a fantastic celebration! Everyone looks like they were having so much fun.

Nice to see you again :) We sure missed you.

we LOVE your new blog design .. and that picture of you in the blog's banner is so pawsome

Oh! what a fun celebration everyone had.

What a beautiful ceremony. We know you and your family are so proud of your beautiful children.

Alasandra, The Cats and Dogs said...

What a lovely cereamony. And the wheelie babies are so sweet. ~S,S, C & F

How sweet! The babies are the cutest things and so wheelie welaxed!:)
must be in the family genes.

What a beautiful christening!

Lovely ceremony, and so inpiring.

What a lovely christening. You all look very smart.

Oh Myrna! What a touching ceremony! You and Gilbert are such loving parents.

It really was a beautiful ceremony. Mom said if you could have seen me at the baby wheelies age those two would appear to be angels. I don't know what THAT means!

Thanks for inviting me, it was great to see everydog.

oops that was me JOE STAINS

Quite impressive. Looks like the baby wheelie had on an antique christening gown. Everyone looked so elegant and proper. Good thing Hootie didn 't go! (You know,"there goes the neighborhood".hahaha)
Smooches,
BabyRD
ps-How's your mommy's neck? Our daddy's still in pain, but says he is getting better with each day. He goes back to Phx next week, so then we can play catch up on all the blogs---we hope.

Thanks for sharing these beautiful pictures from the ceremony, Myrna. I can't wait to watch these little guys grow. You are Gilbert have such a lovely family!

What a lovely ceremony! The twins are beautiful! The pictures are fabulous!!!

How did woo manage to keep the skreaming and shrieking down?

Such a sweet ceremony! All the pictures are fantastic

Myrna (and Asta and Mommi and Daddi)

We just KNEW the christening was going to be tender and beautiful, and it was nothing short of that. Romy and Bertie are beyond precious, and already their little personalities are shining through! It will be so special to watch these sweet little wheelies grow up.


This has to have been one of the most special events in our life. Now the secrets are out … we (especially Fergi) were determined to see those beautiful babies dressed in their christening gowns first hand, and we were equally determined to make it to NYC, even if briefly. (We are so honored.) And we did it! We made it there and back and Moma didn’t even know! She was so surprised to see us standing there, proud and all dressed up, part of the family portrait. She hasn’t stopped smiling. We’ve been able to tell her all about the beautiful event, with lots of details. She’s proud of us and of our increasing confidence. And she’s confident, herself, that little Bertie is going to start giving us lessons in extreme playfulness right away. What a wonderful thing.

Thank you for including us in such a special event. We will remember it always. As we're sure you will.

What a beautiful ceremony! I do think you might have your paws full with Bertie. hee hee Thank you for sharing your special day with us.

Lovely pictures - so cute - oh I think I'm going all soppy, this won't do at all, us Scotsmen do get a bit sentimental, especially after a wee dram or two!
Cheers, H.

What a wonderful day.

OMDDDDDDDDDDDDDDD!!!!!
What a wonderful and touching ceremony!!!!
Thanks for sharing with us dear friend!!!!
We would love were with you!!!!!!
All of yoou and your guest look sooooooooooooooooo gorgeous!!!!
Great great great photos!!!!
We love youuuuuuu!!!!
Lots of love and kisses

Hi, Myrna!
Sure it was a beautiful ceremony!
Thanks for sharing the pictures!
Kisses and hugs
Lorenza

What a dashing group all of you make for such a wonderful event.