MLK Birthday
I asked my daddy to tell me what the big deal is about MLK and why we have a holiday today.
He was very emotional about it and took a long time to answew.
He said that MLK was a vewy
couwagious man who believed in non-violence.
I asked him to explain and he told me about King’s
being put in jail in Biwmingham ….
.see his letter pwease at http://www.bu.edu/irsd/Ec326_2004/
material_2004/Letter from Birmingham Jail.htm
In August 1963, Daddi had weturned from the Peace Cowps in Colombia, and was wowking for the PeaceCowps
in Washington and living with 4 othew wetuwned PC guys fwom Colombia.
He and his fwiend Bustew walked ovew to the Lincoln Memowial to heaw Dw Luthew speak and stood in the
fwont pawt of the crowd to hear the speech on a vewy hot day. 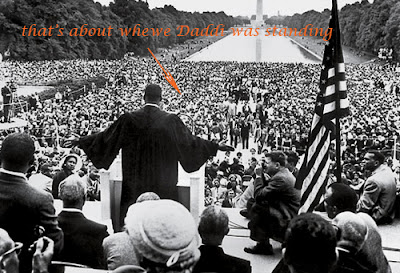 It was weally a celebration although
it was called The Civil Wights Mawch.
Thewe was moosic by Mawian Andewson, Joan Baez, Bob Dylan,Mahalia Jackson and Petew, Paul, and Mawy.
Thewe wewe many famoos hoomans in the 250,000 people who had gathewed to heaw him speak.
Today that speech will be wepeated all over the US to help evewyone wemember  Dw.King’s contwibootion.
At the end of the speech, evewyone sang “We shall overcome” and peacefully left the Lincoln
Memowial.
[My daddy says that for hoomans interested in the historical context and a surprising contribution to
the speech by Mahalia Jackson…go to http://www.guardian.co.uk/world/2003/aug/21/usa.comment]
The weason today is so emotional for my Daddy is that Dw.King was assassinated in Apwil 1968.
Daddy then wead me Robewt F Kennedy’s speech,
On the Mindless Menace of Violence, which was a little ovew my
fuzzy head, but I definitely got the feeling—
Violence huwts evewybody, fuwwy ow not, and doesn’t solve any pwoblems.
Viowence cweates nothing.
No matter if you are a doggie, cat, hammie, bunny, howsie , donkey, ow any othew of god's cweatoowes--evewyone looses and is degwaded..
All furries want the same basic furry things
Don’t waste the so little time we have befowe we go to the bwidge
We awe all bwothers and sistews 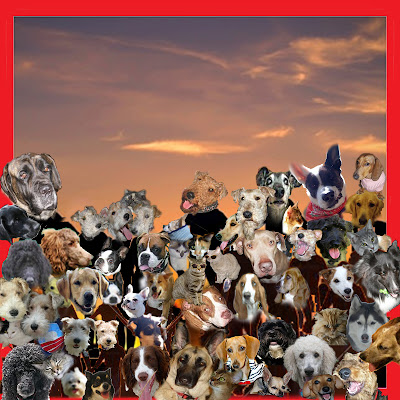 It seems to me that this is just as twoo today as it was in 1968.
—violence is stoopid
Pwease spend a moment today thinking about non-violent ways to solve pwoblems.
I love all of you (and if you don't see youwself in the pictoowe it's the fault of the camewa)..believe me, you awe all thewe holding hands wif us

Oh Sweetie..it makes me so proud to know you when you wax all eloquent about social justice like that. I must inherit that from my Dad, like you do.

ASTA...THANK YOU FUR PUTTING THIS MOST IMPORTANT POST UP TODAY!!!!!

On my hill we believe that everybuddy is impawtant and we do not like mean words or deeds... one little bit!!! I have been taught to Love Everybuddy and that makes me feel happy inside.
THANK YOU ... and your Dad!!!

What a beautiful post, Asta-we agree with Frankie-it is the most important post put up today!
Thank you, dear friend.

It is a day forgotten here but we thank you for reminding us about MLK. If only all the problems in this world would be solved peacefully, what a better place we would be in.

Oh girlfuriend...dis was a powerful and most important post! I thank you fur doing dis post and not letting anyone furgets about one of da greatest speeches evers.
Your dad sounds so much likes my dad! And I am also proud to say dat my girl can recite most of MLKs speech...hey she's only 8.
Fantastical tribute dear furiend...and I sees me in da foto...hehehe!

What a wonderful post, Asta! You're absolutely right - violence is dumb - real dumb!

Love ya lots
Maggie and Mitch

Thank you, Asta, for reminding us of the very important legacy of this incredible human. Many your voice and the voice of a million others be heard today making the same plea...Stop the Violence, let us work together.

Your daddy is a very wise man who blesses us all by sharing his amazing experiences. They help us ALL to understand.

I believe with my heart and soul, that we SHALL overcome! Happy MLK Day!

Thank you for this post. We wholeheartedly agree with everything you said -- and wish everyone would listen!!!!

Very valuable post! I agree with all you said. Stop the violence and spread joy and peacefulness.

Asta!
You post is super duper pawesome!
Violence is what we see here where I live everyday.
I wish this bad thing will end soon!
Take care
Kisses and hugs
Lorenza

Bravo to your mommi, daddi, and WOO fur this great post!

Of course, I can see myself, Asta...I'm right there in the front looking very Lacie-like!

Violence is never right. It's a fast knee jerk response or worse when it's previously planned. And it doesn't work. It doesn't solve the problems long term. It crushes spirits.

We love this post and we adore the pic of us all holding paws together. Peacefully.

We love you dear Girl!!!

Now I haven't heard of any of my boyfriends getting warts from me. Have you????

Oh Asta, this was just beautiful! Thanks for reminding all of us about why this day is so important. Mama and I are both pacifists and feel these words deeply. I love the picture of all of us holding paws.

KC and the Giggleman Kitties said...

What a beautiful post, Asta. We wish effurryone could feel tha same, what a wonderful world it would be.
I wish we could hear your Daddy's stories.
Love & Purrs,
KC & Krew

Thank you Asta! You inspired our blog post today! We hope you do not mind us adding our woofs!

This is a most wonderful post, Asta! You and your Daddy are most in-the-lec-ture!

Thanks for inspiring us with this post, ASTA! We say NO! to violence too.

take care,
Scarlet and the rest of your friends from the Animal Doc's blog

Asta, we are both holding hands with you, all the way across the big P. Daddi must feel so privileged to have heard that speech.
Peace and love from Gail and Bertie.

Violence should not have its place in the world!

PS from Gail: just had a quick look at the link to the Guardian article. Gary Younge is one of my absolute favourite journalists! Glad he's appreciated over your way too.

Violence is the stupidest ever!
Thank you Miss Asta for such a wonderful post!

Well done Asta on a very important post. As you know me and Mum both quite young so it very important for us to learn stuff like this and to realise what a short time ago it really did be. Your Daddi has had a very interesting life and was very lucky to get to see the speech in pawsone!
~lickies, Ludo

What a lovely tribute to a very special man. And you are right....we should all learn to settle our differences without the use of violence. Yet the violence continues and we cry and bury our dead as yet another group of Americans are gunned down in Arizona.

Don't we ever learn?

Asta, beautiful and thought provoking post. Thank you for it.
We agree with the other posts. Violence is not a good thing. Treating people like we would like to be treated would also be good. Too bad it doesn't happen like that so much.
Wags
Ernie,Sasha,Chica
PeeEss: We love you & we agree you have a peaches & cream complexion. M liked that one.

Miss Asta, what a beautiful post today. Thank you. We're holding paws with you, too, singing We Shall Overcome.

Asta, the true beauty of your family shows through in this post.

Yesterday was a 'bad' day for me, I didn't even think about MLK.

Thank you for getting me to stop and remember, and for moving me.

Aw, you told it so perfectly. I haven't visited before but I heard through the grapevine that you'd written a wonderful post about MLK day. That is so true. Thanks.

We are so on the same page ... true pacifists we are. Thank you for such a special MLK and anti-violence post. Did we recognize ourselves in that crowd?

Moma well remembers those days of MLK. A gazillion years ago, when she was just a pup, her family moved to a teensy pre-civil war town in Georgia. She moved there the year after the Civil Rights March, and was there when MLK was assassinated. She'll never ever forget the differences in values of the people she knew and went to school with. She still talks about it a lot.

We need to stop pawing this out ... and hope Gramma's (slow) internet connection lets us send this and see a couple more posts.

We miss you all. So does OurGirl. She said so tonight.